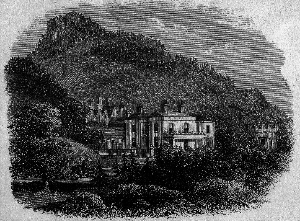 Maes Fron - often written as one word Maesfron - is derived from the Welsh "Maes" meaning field and "Fron" meaning mountain. The field on the mountain. The mountain in question is Moel-y-Golfa which rises steeply to over 1,300 feet and is shown in this etching.

Maesfron was built circa 1820 for Francis Allen a local solicitor who had undoubtedly done what was termed a “Grand Tour” of Europe. This influenced the style of the buildings, and many features of the estate can be described as Georgian with Italian influence. Francis Allen died in 1852 leaving the property to his daughter Mary Grace Allen who married in middle age a Liverpool businessman William Fisher in 1854. The couple made many changes to the estate including the addition of attractive service cottages to the rear about 1860, and extensive wooden conservatories in the gardens. The couple were childless and after Mary’s death in 1893 the estate was inherited by her nearest relatives the Gregory family who lived in Canada. Not wishing to live at Maesfron, the Gregory family rented it to various tenants until about 1918 when it was sold together with its related properties.

In 1927 J.B. Priestley was inspired by the location of Maes Fron with the steep slopes of Moel y Golfa behind to use it in his novel "Benighted" - the story of a group of travellers journeying from mid Wales to Shrewsbury trapped in a storm, and forced to spend a terrifying night with the Femm Family (Fron family ?) and their mad butler. The book was filmed in 1932 under the direction of James Whale as "The Old Dark House" starring Boris Karloff as the mad butler. 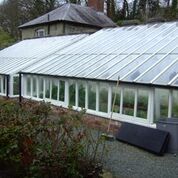 Thereafter Maesfron had several owners and much of the original estate was sold with the remainder going into decline by the late 1980s. After being empty for two years during which period much vandalism occurred, a rather sorry looking Maesfron was bought by the present owners Dr Derek Owen and his wife Monica in 1993. Now after more than 25 years of hard work – and a lot of specialists and

a lot of money – Maesfron has regained its inheritance. Come and see this beautiful small estate.